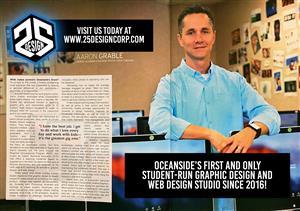 My name is Aaron Grable and I've been in the teaching profession since 2003. I teach Career Technical Education at El Camino High School and I thoroughly enjoy the classes I teach; Graphic Design and Web Design. I have my own freelance business, called Grable Graphics, which I also enjoy and which is a constant source of fresh ideas in the classroom. I've been teaching at El Camino for most of my career and I enjoy how much the staff care for each other and for the students. My plans for the future are to (finally) finish my masters' degree and to continue to travel to new and exciting places with my beautiful wife.

Justin Moodie teaches Photography at Oceanside High School, where he also leads the Arts, Digital Media, and Design Academy for Career Technical Education. Working to create authentic learning experiences for students, Justin enables them to work for real clients through their photography assignments. Attending the University of California, Santa Barbara, with the original intention of studying Marine Biology, things quickly changed and Justin's natural inclination for all things creative quickly caught up with him. After three years, Justin received a BA in Art Studio (2004), soon followed by a Masters degree in Education (2006). In June of 2005, Justin received his teaching credentials from the state of California and has been teaching secondary level Art, Science, Technology and Literacy ever since. During the summer of 2011, Justin was sent to China to collaborate with local educators in the development of cross-cultural curricula through a Fullbright-Hays fellowship. In 2013, Justin earned the honor of being recognized as a National Board Certified Teacher while teaching as an expat in Ciudad de México D.F. In 2017, Justin earned his Administrative Services credential and completed an M.A. in Educational Leadership at UC Berkeley, with a focus on Social Justice. Serving with the CA Department of Education, Justin worked to create the new state standards for Visual and Performing Arts, published in 2019. Most recently, Justin was awarded a Grosvenor Teacher Fellowship and has been invited to join Lindblad Expeditions and the National Geographic Society while on an upcoming excursion to one of the most remote places in the world!

Juan Hernandez is a Science and Career Technical Education (CTE) teacher and has been teaching for 12 years. He began his teaching career in Los Angeles where he worked at two start-up charter high schools near Los Angeles International Airport. Juan took a break from the classroom working in the field of Environmental Health & Safety. He made his way back to the classroom using his industry experience as a means to obtaining a CTE credential. He 's been at Oceanside High School for 6 years now and serves as a pathway lead for the Environmental Innovation Academy. The academy focuses on both environmental science and engineering. Juan is involved with the environmental science track which includes a three course series to complete the program. These courses include "Introduction to Green Technology, "Energy & Environmental Design" and Environmental Sustainability. Juan is a native of Oceanside but lived in Colorado for 12 years before returning to California for college. Juan lives in Oceanside with his wife Celia and their two children. Their oldest graduated from Oceanside High School in 2021 and their youngest will also attend OHS.

Jen DuBois is thrilled to take on the CTE - Child Development, Education and Family Services role at OHS. After 20 years supporting children and their families in children's hospitals as a Certified Child Life Specialist, Jen shifted to public education 5 years ago. She then taught some of Oceanside's youngest students at Nichols Elementary School before finding this perfect teaching position. Jen believes that teaching teens about working with younger children is the ultimate combination of her own skills and passions. In her free time, Jen goes on adventures with her family, cooks and spends time in nature.

Dave graduated from the University of California, Los Angeles, with a Bachelor of Science in Physics. He previously worked as an engineer for the Navy at the Space and Naval Warfare Center in San Diego. For the last fifteen years, he has taught Physics and Engineering courses at Oceanside High School.

Chandra Faist holds a bachelor's degree in History from San Francisco State University and a degree in law from Purdue University, specializing in Criminal Law. She has worked for the Oceanside Police Department for over 10 years as a Beach Patrol Officer during the summer season. She started the Academy of Justice in 2009 and is proud to have led over 2500 cadets to complete the program, many now working in the criminal justice system. She lives in San Diego with her 7 year old daughter and loves to spend time with her friends and family riding dirtbikes and relaxing in the pool.